Carl Fredricksen had always dreamt of escaping to South America to follow in the footsteps of his childhood hero, famed explorer Charles F. Muntz. Now seventy-eight years old, and facing living out his days in a retirement home, Carl seizes the opportunity to make his dream reality. Attaching thousands of helium balloons to his home he sets off on a journey into the unknown. Unbeknownst to Carl, Russell an overly keen Wilderness Explorer trying to earn his “Assisting the Elderly” badge has accidentally stowed away on-board his floating house. What follows is a tale of genuine adventure and bonding as the mismatched duo face unexpected encounters and perils in the South America wilderness. 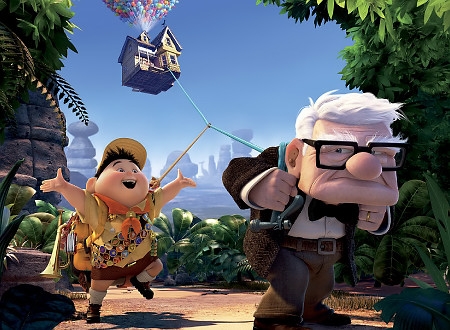 What makes truly great movies great is all in the story. Without a good story you don’t really have anything. Sure you can litter the screens with effects, action, maybe even some clever jokes, but a movie should resonate with you and leaving you feeling different inside. While I do not wish to reveal particular plot-points or ruin anything for anyone I will say that the opening ten minutes of this movie are easily the most moving of all Disney/Pixar movies. In fact the entire film is full of heartfelt moments that will leave you feeling warm inside.

The interplay between Carl and his wife, Carl and Russell, and Carl and Dug the dog is key to this movie. In fact the more time that Carl spends on the screen the better. Who would have thought that having a 78 year-old protagonist would work in an animated movie? It does so simply because Carl is so relatable. Everybody has someone in their family that Carl will remind them of and we all have childhood dreams that we may have outgrown but we’d still love to fulfil. Russell too is great, a delightfully inquisitive and helpful child that never veers into annoying territory despite going counter to Carl’s wishes most of the time. The two main dogs, Dug and Alpha, provide the biggest belly-laughs with Alpha’s voice box problems particularly brilliant. Christopher Plummer is brilliantly cast as the main villain of the piece, a man after a giant bird that befriends Russell for whom the solitude of South America has driven him quite mad.

Visually the movie is yet again another high point in computer generated animation. The scenery in South America in particular is amazing. The visuals are actually enhanced rather than distracted by the 3D, although for vast periods of the movie you genuinely won’t notice them. In certain scenes the 3D really comes into its own, and the opening swoop over Sleeping Beauty’s castle in the Disney logo I simply adored. That aside there is a feeling that the film might have looked just as good in 2D. The musical score by Michael Giacchino is practically a character in the movie and punctuates the set pieces with aplomb.

This movie was five years in the making and the attention to detail is impeccable. The animators rounded up hundreds of dogs to study their behaviours and interactions in order to create life-like versions in the film. They sent out technicians and artists to monitor a house being lifted in San Francisco. They even brought all their grandparents in to the studio to tell stories of adventure and childhoods long past. It is for reasons like this that Disney/Pixar is simply the best studio at making movies around today.

I cannot express how much I utterly enjoyed this movie. The themes may be a bit more adult centred than most but it is still something that kids should love too. I only wish I could convince my Gran to watch a “cartoon”.

As an extra treat for cinema fans, Disney/Pixar places a short before every feature film. The short this time is titled Partly Cloudy and is a quite simply brilliant take on the old stork delivering baby story. The plot centres around Gus, a lonely grey cloud, who has the unthankful task of creating all the dangerous and spiky baby animals, including alligators, sharks & porcupines. Peck is his delivery stork, who has the unfortunate task of carrying these little bundles of joy to their new homes. though wordless this entire short is hilarious from start to finish. The animation and 3D visuals are superb, wonderfully setting the scene for the magic to follow.